We use cookies to ensure that we give you the best experience on our website. If you continue to use this site we will assume that you are happy with it.Ok

When Brand Vending Products first opened its doors for business in 1991, the flat segment of bulk vending bore little resemblance to what it is today. Launched by Randy and Lauri Brand, the company brought temporary tattoos to the industry. Flat vending was still seen as a relatively small and cyclical niche, compared to capsuled toys and confections.

However, beginning in the early 1990s, the industry began to change for the Scottsdale, AZ-based vending company. The artwork on flat products began to improve and companies that couldn’t keep up began to fall by the wayside. Stickers and temporary tats, once the preserve of specialty operators and occasional full-service bulk vendors, slowly began to muscle their way into the bulk mainstream as consumers flocked to the new and improved designs.

Within six years, flat vendibles underwent enormous changes. As new and improved artwork drew consumers to the machines, operators rushed into flat vend merchandise, buying up machines nearly as fast as they could roll off the assembly line. “Brand’s biggest years back then, financially, were built around selling machines,” said Brand’s Dax Logue, the company’s chief executive. “At one time we were selling 700 machines a month; that was between 1994 and 1995.”

And Brand wasn’t alone. Other companies began offering flat venders as both large and small operators continued to fill out their locations. Even conservative estimates put the number of machines placed on location during those early years in the mid-six-figure range as four- and six-column machines became a standard feature on racks of all sizes.

It was this infrastructure of newly placed machines that played a key role in transforming flat vending from a cyclical novelty to an industry staple. Those columns had to be fed, and Brand was only too happy to do the job with a steady stream of innovative designs. Eschewing the common generic and easily copied products, Brand catered to flat vend consumers by way of an aggressive licensing strategy, buying up licenses for some of the hottest rock bands at the time, including Green Day and an assortment of such “boy bands” as the Backstreet Boys and ‘N Sync.

“Brand was one of the first companies to have high-profile licenses, like the boy bands,” said Logue. “We were ‘the boy band company’ for years. All the big licensing companies came to us first, knowing we could deliver.”

Then disaster struck. Caught unexpectedly by the notoriously fickle tween consumer tastes, the company had invested heavily in pop sensation Ricky Martin, a former member of the Latin boy band Menudo who was then in the midst of a cross-over solo career that included hits like “Livin’ la Vida Loca.” For a sticker license, it seemed very much a sure thing, except it wasn’t. “Ricky Martin was the biggest disaster in the history of the company,” Logue explained. “That was the end of the boy band era. We ended up doing controlled shredding of two 40-foot containers.”

The Ricky Martin episode represented a turning point for the company. Brand, which had pioneered high-profile licenses just a few years earlier, turned its focus to creating its own in-house designs through its subsidiary, Desert Sky Graphics. “We basically made the decision that we couldn’t be vulnerable to trends in other sectors,” said Logue. “We knew we needed to invest in our own abilities, in designs that fit on a tat or a sticker.”

As Logue noted, this strategy, which the company adopted in 1994, has proven hugely successful for the company. Using an in-house art team to create images closely associated with current trends and classic tattoo designs, Brand has managed to keep the quality high with original artwork. “A lot of these designs had bigger numbers than the boy bands,” Logue said. “And we had lines with more staying power.”

Bringing graphic design in-house allowed Brand more flexibility without the burden of rising royalty and guarantee costs, along with the same kind of copyrighted exclusivity associated with licensed products. And Brand could issue new designs according to its own timetable, and expand product offerings by blending designs from different lines together for maximum impact. A variety of dragon tats from different offerings, for instance, could be combined to form a new dragon-themed series. 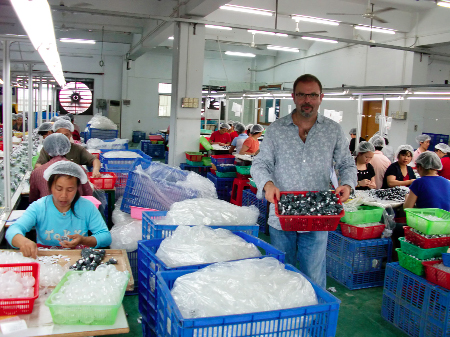 WHERE DREAMS ARE MADE — Brand Vending chief executive Dax Logue gets hands-on experience with the production of the company’s smash hit Sqwishland products at its Chinese manufacturing facility; a production line is running at right. Sqwishland is the flagship series in the company’s recent strategy of developing its own branded themes, rather than relying on others to create demand and then buying a license. Backed by a popular Internet game, Sqwishland has proven so popular that the retail toy industry is demanding the products, too.

By 2003, with Brand almost completely weaned off licensed products, the company headed in a new direction. During the NBVA convention in April of that year, the firm rolled out its first line of capsule products. “We’d been running studies since the late 1990s about trending,” said Logue. “And one of the trends that came up was a slowdown in flat vending. There was also an escalation, with more people doing more stickers and tats. So the pie was getting sliced up thinner and thinner as the prices were dropping.”

Added to these trends was the fact that the industry was undergoing a period of consolidation, with large operators buying up small and midsize ones. For Logue, an expansion into traditional capsule merchandise seemed the next natural step.

Accompanying this expansion was a move to expand the company’s own infrastructure with a 20,000-sq.ft. distribution center in Marion, OH. “That facility allowed us to commit to a lot more product and go after the East Coast,” said Logue. “It allowed us more warehouse room, more ability to store more product, and to hit the market quickly with the best, most unique designs.”

Applying to capsule products the same principles of in-house design that had worked for flat merchandise, Brand moved aggressively into the capsuled arena with an extensive line of toy fashion accessories. “We designed everything in-house rather than buy it from jobbers or the factory,” Logue said. “What we’ve found by doing our own design and distribution processes was that we can keep tweaking it until it works. With us behind the design, we’re able to get behind the product, discuss it with operators and work strategies with them to get the product moving. Everyone benefits; you get a longer lifecycle.”

This issue of lifecycle for a product is another critical element when it comes to Brand’s strategy. Perhaps learning a lesson from the Ricky Martin debacle, the company is keenly aware of the ever-quickening lifecycles associated with tween trends. “The trend lifecycle keeps getting shorter and shorter,” said Logue. “You could run Teenage Ninja Turtles in your machine for two or three years. It may have lasted longer than in other channels. Today a cycle could be as short as six months. What we’ve been able to do by controlling the design and distribution elements is keep in close touch with the market and get more sales.”

NOT AGAIN!
However, barely a year into its entrance into capsule merchandise, another major blow hit the company in 2004 when the industry was rocked by the jewelry recall. “We were at the max with fashion accessories when the recall took place,” Logue recalled. “But we licked our wounds, took the losses, and decided the only way to play the game was to go into plastic injection molding.”

Sticking to the same in-house design strategy, the company entered the plastic products arena with line-ups of bestselling toys, such as Sea Mania, and later, the even more popular Sqwishland. It is Sqwishland, said Logue, that has proven to be the company’s break-out product, with well over 50 million sold.

“Sqwishland started out as five original characters, then went to the second level, and we extended the brand by five new characters,” he said. “Now we’re in our sixth extension of that line. It’s focused on brand building, rather than a cyclic run.” 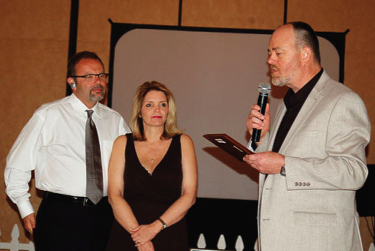 The Sqwishland franchise, supported by an online game, has proved so popular in the industry that it won top honors for best 1″ and 2″ capsuled products from the National Bulk Vendors Association during the 2010 convention. This impressive win was a followup to the previous year, when Sqwishland won honors for the best 1″ capsule item at the NBVA meet. That win was particularly noteworthy, Logue pointed out, because it recognized the 1″ version as able to fetch a 50¢ vend pricepoint. “The one thing I’ve heard consistently since 2006, when we launched the first Sqwishland product, is that operators finally have a 1″ product that allows them to charge 50¢,” he said. “I believe the overwhelming success of Sqwishland helps people understand that it isn’t size, but what children want, that determines the price.”

The success of Sqwishland has not gone unnoticed by the larger toy market. Brand is currently getting ready to launch a traditional retail line of the mega-selling product line. “Our successfully built game online for Sqwishland opened up interest in places to which we’ve never been exposed,” explained Logue. “Retail buyers came to us. We didn’t have a retail company, package or strategy. The demand is there right now. So, we’re now in retail.”

Contrary to seeing retail sales of Sqwishland cannibalizing the bulk market, Logue believes the added presence will actually grow demand for the line in bulk vending through brand recognition. “The price is still much better in bulk than retail,” he said. “Retail promotes bulk and bulk promotes retail. As new Sqwishland products are launched, vending will get the product first. Right now, in retail, we’re offering standard products that have been out in vending for some time.”

WHAT NOW?
Brand has seen the industry’s transformation over the past few years up close as the mid- and mega-size operators have given way to smaller, independent ones. “We’re shipping just as much product volume as we did before, but we’re not shipping as much volume in individual orders,” said Brand CFO, Lauri Logue. “We’re shipping a lot more ground. The mega operators are gone, and small and midsize operators are running their businesses more efficiently. And they’re watching movement very closely. They’re weighing everything closely right down to how often they have to refill machines.”

This is not entirely bad news, she explained. A lot more operators on the bulk vending side will pay for a product that will sell, versus the cheap junk that will just sit in the machine. “I really think they’re paying more attention to what they’re putting into their machines,” she said. “They have to pay more attention to maintain their revenue. And merchandising has been more important than it’s ever been.”

So, what’s next? Dax Logue sees prices stabilizing and the market reaching equilibrium. “I think there’s going to be a meeting of the minds between operators and suppliers,” he said. “I think they’re starting to realize some of the moves that took place, like the increased commissions, impacted their cost of doing business. The price of a vending capsule hasn’t changed that much.

All these costs that have been underwritten by everyone and those still in the game understand that we all have these increases if the industry is going to move again. Operators now understand that kids don’t value a quarter like they once did. And product has to be priced to market value.”

The future looks bright for Brand Vending Products. After a few setbacks, the company has hit its stride in the last few years with a string of bestselling products and innovative marketing. And, as Dax and Lauri Logue are quick to point out, they have adopted a strategy that has positioned the firm for the next 20 years.